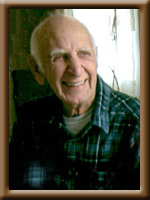 Born in Black Point, Queens County, he was a son of the late Harry and Selena (Finch) White.

He was a loving husband , father and grandfather. He worked for Stedmans Warehouse and Home Hardware in Toronto before moving back to Queens County in 1977, where he worked for Atlantic Book Binding and then at Stenpro until his retirement.

Bernie loved anything to do with the outdoors especially, watching and feeding his birds, landscaping his property and gardening. He was a fun loving guy and was always happiest when he was heading out to a dance.

Visitation will be held Wednesday, September 29th, 2010, from 7-9 p.m., from Chandlers’ Funeral Home, Liverpool. A Funeral Service will be held Thursday, September 30th, 2010, at 2:00 p.m., from Trinity Anglican Church. Reverend Donald Lawton officiating. Burial will be in Trinity Anglican Cemetery, Bog Road, Liverpool. Family flowers only. Donations may be made to the Canadian Cancer Society. Online condolences may be made at www.chandlersfuneral.com

Offer Condolence for the family of White; Bernard Allan “Bernie”