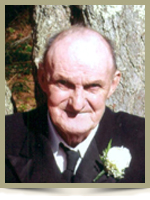 Whalen, James Douglas, 78, of Liverpool, Queens County, passed away on Friday, May 16, 2014, in Queens General Hospital, Liverpool, surrounded by his loving family.  Born in Liverpool, he was a son of the late George “Edward” and Ellen (Lannon) Whalen.  Jimmy was known as a very hard worker. He worked at numerous jobs over the years. He sailed on the Bowater Paper Boats shipping paper to England, a stevedore at the Bowater Mersey Paper Company, a paver at Budget Paving, a watchman at Steel and Engines and he also painted houses in his spare time. He enjoyed playing many sports but he excelled at baseball, bowling and playing pool. Jimmy had a love for the water and could often be seen on the water in his old dory.  He is survived by daughters, Carolyn (Ronald) Kincade, of St. John, Linda (Greg) Whynot, of Liverpool, Mary (Roland) Evans, of Liverpool, Brenda (Steven) Kennedy, of Liverpool, Cathy Whalen, of Liverpool, Heather Whalen (Kevin Henderson), of Liverpool, Barbara (Wayne) Stewart, of Milton; sons, Douglas Whalen, of Liverpool, Mike Whalen (Margaret Whynot), of Milton, Gregory Whalen, of Liverpool, Barry Whalen (Julie Kempton), of Caledonia, Blair Whalen (Amanda Whynot), of Liverpool; 21 grandchildren; 9 great grandchildren; sisters, Barb (Wayne) Peterson, of Digby, Jeanette Deganis, of Halifax, Betty (Leo) Pennell, of Trepassey, Newfoundland.  He was predeceased by his loving wife, Betty Lou; sisters, Margaret, Dot, Mary; brothers, George “Budd”, Bill and John.  Cremation has taken place under the direction of Chandlers’ Funeral Home, Liverpool. A Celebration of James’s Life will be held on Tuesday, May 20th, 2014, at 11:00 a.m., from Trinity Anglican Church. Reverend Judy Cross officiating. Burial will be in Trinity Anglican Cemetery, Bog Road, Liverpool. Family flowers only. Donations may be made to the family or to a charity of your choice. Online condolences to the family may be made at www.chandlersfuneral.com

Offer Condolence for the family of Whalen, James Douglas