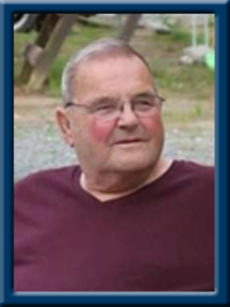 Westhaver; Frederick “Freddy” Donald, age 76, of White Point, Queens County, passed away in Queens General Hospital, Liverpool on Saturday, January 8, 2022.
Born in White Point, Queens County, he was a son of the late Thomas Whynot and Elsie Westhaver.
Affectionally known as “Fast Freddy”, he was a jack of all trades and a master of many. There wasn’t too much Freddy couldn’t do once he put his mind to it. He was a people person and was always happy to have a yarn or share a joke with anyone who dropped by his garage. Freddy enjoyed Off Road Racing and he and his family operated Rough Neck Racing for the last 25 years, hosting many races on his track with people coming from all over the Maritimes to compete. He was an automotive enthusiast, collecting many old Ford cars over the years. He also enjoyed getting out and hitting the roads for a tour of the countryside with Gert or one of his buddies. Freddy was also famous for his annual Labour Day weekend fish fry, washer tournament and fire works show in Moose Horn. Above all else, Freddy was most passionate about his family and spending time with them, especially when they were all at the lake. He will be greatly missed by his family and close friends.
Freddy is survived by his loving companion, Gertrude Whynot; children, Tommy (Annette) of White Point, Terry of Liverpool, Collin (Pam) of White Point, Kevin (Bambi) of White Point, Kim Westhaver of Pleasantfield and Sabrina (Tom) Seldon of White Point; grandchildren, Samantha, Nicole, Tiffany, Steven, Talla, Tessa, Jeremy, Ona, Kendra, Emily, Peyton, Jonathan and Aidan; many great grandchildren and great great grandchildren; sister, Bessie of British Columbia; brother, Laurie of White Point.
Besides his parents, he was predeceased by his wife, Carolyn; sister, Lorretta and brother, Denny.
Cremation has taken place under the direction of Chandlers’ Funeral Home, Liverpool. A Celebration of Freddy’s Life will be held on Thursday. May 19, 2022 at 11:00 a.m. from the Liverpool Fire Hall. Reception to follow. Burial will take place in Trinity Anglican Cemetery, Bog Road, Liverpool. No flowers by request. Donations may be made to Queens County Ground Search and Rescue. To share memories or condolences, please visit www.chandlersfuneral.com

Offer Condolence for the family of Westhaver; Frederick “Freddy” Donald