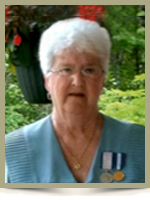 Westhaver, Etta Melba, 78, of Hunts Point, Queens County, passed away peacefully on Monday, March 31st, 2014, at home, surrounded by her loving family after a five year battle with cancer.

Born on the beautiful Magdalen Islands, she was a daughter of the late Glenson and Jane (Burke) Craig.

Her love of life was only exceeded by the love of her family that was unconditional. She was a loving mother, grandmother, great grandmother, sister, aunt and friend. Etta lived by the motto that giving is better than receiving. She enjoyed spending countless hours over the years volunteering in her community. She performed many acts of kindness that were unknown to many.Etta received many awards over the years for her volunteering, but she was very humbled to receive the 125th Anniversary of Confederation of Canada Medal and the Queen Elizabeth II Golden Jubilee Medal for her exceptional volunteer  service.  She was a past warden of both St. James Anglican Church, Hunts Point and Trinity Anglican Church, Liverpool for many years.

As giving in life, she continues to do so in death by donating her body to science so others may learn. A Celebration of Etta’s Life will be held Saturday, September 6, 2014 at 2:00 p.m. in Trinity Anglican Church, Liverpool, NS. Reverend Judy Cross officiating. No flowers by request. Donations may be made to St. James Anglican Church, Hunts Point or to The Lodge That Gives, Halifax. Online condolences may be made to the family at www.chandlersfuneral.com

Offer Condolence for the family of Westhaver, Etta Melba