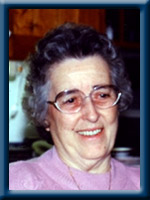 Wentzell, Mildred Kathleen, 82, of Beach Meadows, Queens Co. passed away peacefully at Queens Manor in Liverpool on December 24th, 2011 with her daughters at her side.

Born in Malagash, Cumberland County on Sept. 6th, 1929, she was the eldest of four children born to the late William and Truena (Mattatall) Purdy.

Mildred will be remembered as a loving and generous wife, mother and grandmother. She gave generously of her time and talents to make everyone’s life a little brighter and more fulfilled. Much of her time was spent knitting and crocheting items, most of which were given to family and friends. She also loved to cook and bake and those who were fortunate enough to sample her breads, pies and good home cooking were always wanting to come back for more. They will say they never left her kitchen hungry! She kept her wood stove burning and many times she had to open the door to let the heat out in the cold of winter. She gave much time and energy to various community events and activities including the Emmanuel United Church, Beach Meadows Community Hall, Seaside Seniors and the Brooklyn Marina. Mildred spent her first years in the area working for a local doctor and his wife as Nanny to their four children. Once married she helped run a large turkey farm with her husband for many years. In her retired years, she provided child care to several children in her community whom she loved like grandchildren and then, when she had grandchildren of her own, she spent as much time as possible with them and loved every moment.

She is survived by her daughters Joanne (David) Daniels, of Beach Meadows and Pauline (Andrew) Whynot, of Mahone Bay; grandchildren Matthew, Jessie and Jared; sister Sadie (Howard) Treen, of Malagash and several nieces and nephews.

Mildred was predeceased by her husband Edwin and brothers Hilton and Winston.

Cremation has taken place under the direction of Chandlers’ Funeral Home.  A memorial service will be held on January 7th, 2012 at 11:00 a.m. at Chandlers’ Funeral Home, Liverpool with Rev. Brian Wentzell officiating. A committal will take place at a later date in Malagash in keeping with Mildred’s wishes. Donations may be made to Queens Manor, Liverpool or the Alzheimer Society of Nova Scotia. Online condolences may be made to the family at www.chandlersfuneral.com. The family would like to extend gratitude to all of Mildred’s care givers both in and out of the Manor and particularly to those friends who continued to provide support and respect during her failing health.

Offer Condolence for the family of Wentzell; Mildred Kathleen