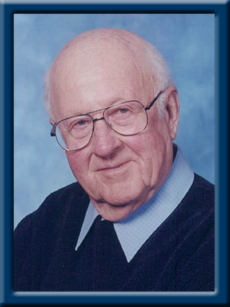 Wentzell, Lawrence, 95, of Eagle Head, Queens County passed away peacefully at Queens General Hospital in Liverpool on April 29, 2020.
Born in Eagle Head, he was the son of the late Merrill and Elizabeth (Teal) Wentzell. Lawrence served two years during World War Two in the RCAF marine squadron based in Dartmouth. After the war, he worked for the Markland Shipping Company where he served as an engineer on ships including the Vinland and Markland delivering newsprint around the world. Following a stint at Steel and Engine Products Ltd. in Liverpool, he began a thirty-year career as a lightkeeper, first at Western Head near Liverpool and then at Cape Forchu, Yarmouth until his retirement in 1989. In his younger years Lawrence was an avid trout fisherman and deer hunter. His favourite pastimes included gardening, carpentry and playing the harmonica and accordion. He was a member of the Royal Canadian Legion, Liverpool and St. John’s Anglican Church, Eagle Head.
He is survived by his wife of 70 years Marjorie (Gerhardt), daughters Nancy (Jim) Sproull, Eagle Head, Valerie (Bernie Power), Halifax, Janice (Kevin Miles), Halifax and son Byron, Sable River.
Lawrence was predeceased by daughter Sherry and brothers Bruce, Wallace, Frank and Irving.
Cremation has taken place under the direction of Chandlers’ Funeral Home, Liverpool. A graveside memorial service will be held Friday, September 11, 2020 at 2:00 p.m. in  St. John’s Anglican Cemetery, West Berlin. In lieu of flowers donations may be made to Queens Manor or Queens General Hospital Foundation. Online condolences may be made at www.chandlersfuneral.com.
Lawrence’s family would like to thank the staff at Queens Manor and Queens General Hospital for their care and compassion.

All those attending Lawrence’s service are asked to bring their own mask, practice physical distancing and provide funeral staff with name and telephone number for contact tracing.

Offer Condolence for the family of Wentzell; Lawrence Edward