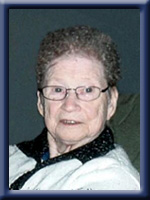 Born on March 5th, 1930, she was a daughter of the late Whitman and Blanche (Wentzell) Martin.

In her younger days Grace loved to have a good game of cards, go bowling, camping and visiting her family in Halifax. People still talk about her homemade bread. In her later years Grace enjoyed flying to Alberta to visit with her grandchildren and great grandchildren

Cremation has taken place under the direction of Chandlers Funeral and Cremation Services, Liverpool. A Graveside Service will be held in the Milton Community Cemetery at a later date. No flowers by request, donations may be made to the Milton Baptist Church Ladies Auxiliary or to a charity of your choice. Online condolences may be made to the family at www.chandlersfuneral.com

Offer Condolence for the family of Wentzell, Grace Marie