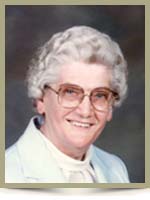 Born in Milton, she was a daughter of the late Seward and Bertha (Godfrey) Coombs.

Edith worked as a store clerk for 18 years with Thorne’s Hardware Store in Liverpool and previously at Walker’s Store and Payzant’s Store. She was a member of the Milton Baptist Church, as well as a member of the Arbutus Chapter # 30, Order of the Eastern Star and received her fifty year’s jewel. She was active in her community canvassing for various charities and functions and also volunteering at the Manor.

Cremation has taken place under the direction of Chandlers’ Funeral Home, Liverpool. Visitation will be held at Chandlers’ Funeral Home on Tuesday, April 3rd, 2012, from 7:00 – 9:00 p.m.. An Order of Eastern Star service will be held on Wednesday, April 4th, at 11:00 a.m. followed by a celebration of Edith’s life from Milton Baptist Church. Reverend Corey Pickens officiating. Burial will be in the Milton Community Cemetery. Family flowers only, donations may be made to Queens Manor, Liverpool, Hillsview Acres, Middlefield or to the Order of Eastern Star Arbutus Chapter # 30. Online condolences may be made to the family at www.chandlersfuneral.com

Offer Condolence for the family of Wentzell; Edith Winnifred