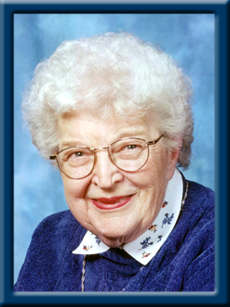 Wentzell, Marjorie.
Eleanor Marjorie (Gerhardt) Wentzell of Eagle Head, Queens County died peacefully at Queens Manor on June 11, 2021. She was 91. She was born in Western Head, where she was lovingly raised by her grandparents, Joseph and Sadie Gerhardt. She attended the local “school on the lane”, and then like many girls at the time, went to town (Liverpool) to work. While there, she met Lawrence who became her husband of seventy years. Marjorie devoted her life to raising her five children. When the children were a bit older, she became an accomplished seamstress. She sewed for Suttles and Seawinds for several years. When that was finished, she continued quilting. Reading was one of her favorite hobbies, and she passed this love of books on to her children. Later in life she became interested in gardening and her wild and colourful blooms gave her real comfort. Her real passion, though, was cards. She loved to get together with friends at home or at card parties and play forty-fives. Marjorie could always be counted on to work at all the church suppers, and her home-made rolls were famous. Marjorie is survived by her daughters Nancy (Jim Sproull), Eagle Head, Valerie (Bernie Power), Halifax, Janice (Kevin Miles), Halifax and her son Byron, Sable River. She was predeceased by her daughter, Sherry, and her husband, Lawrence. Cremation has taken place under the direction of Chandlers’ Funeral Home, Liverpool. A graveside memorial service will be held in St. John’s Anglican Cemetery, West Berlin. Reverend Cherry Workman officiating. In lieu of flowers, donations may be made to Queens Manor or to Queens General Hospital Foundation. Online condolences may be made at www.chandlersfuneral.com . Marjorie’s family would like to thank the staff at Queens Manor for their exceptional care and compassion.

Offer Condolence for the family of Wentzell – E. Marjorie