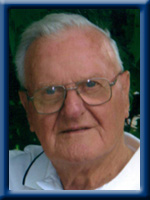 WELLS – Francis E. “Kit”, 85, of Liverpool, passed away peacefully at home on Monday, May 23rd, 2011 with his family by his side.
Born in Liverpool, he was a son of the late Joseph and Lillian (MacLeod) Wells.
Kit served with the Royal Canadian Army Corps during World War II. Following the war, he worked for Bowater Mersey Paper Company Limited and retired as a papermaker after 44 years. He enjoyed sports and played on the Liverpool Larrupers in 1941. He is also in the Nova Scotia Sports Hall of Fame for curling. He was a member of Mersey Branch #38, Royal Canadian Legion, Liverpool for 65 years. Kit will be fondly remembered as a loving father, grandfather and great grandfather and will be sadly missed by all who knew him.
He is survived by his daughters: Peggy Beaton and Janet Grezaud (Ron Keating), both of Liverpool. His grandchildren Danny Beaton of Elmsdale, Brian Grezaud, Ashley Grezaud and Jo-Anna Nickerson, all of Liverpool and great grandson Sawyer of Elmsdale. His sister Dorothy Height of Cole Harbour.
He was predeceased by his wife Katherine Louise (MacDonald), daughter Jo-Anna, son Brian. His sisters Lottie, Evelyn and Gail and brothers Arthur and Walter.
Cremation has taken place under the direction of Chandlers’ Funeral Home, Liverpool. A graveside memorial service will be held Wednesday, May 25th, 2011 at 3:00 p.m. in Trinity Anglican Cemetery, Liverpool. Reverend Judy Cross officiating. Family flowers only, donations may be made to the Canadian Liver Foundation, the Nova Scotia Heart and Stroke Foundation or to any charity. Online condolences may be made to www.chandlersfuneral.com

Offer Condolence for the family of Wells; Francis Edward “Kit”