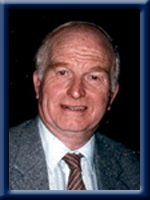 Capt. Hubert Welland D.F.C. RAF
It is with deep sadness that we announce the loss of a husband to Jaqueline (Gauvin) and father to Andre (Suzanne) from Saint John, NB, Valerie (Roger) Lucas from Ste-Adele, Quebec, Daniel (Debi) from Saint John, NB, and Nino (Goretti) from Johannesburg, South Africa. To each of these along with his 8 grandchildren and 5 great grandchildren, he will be greatly missed.
He was a quiet, unassuming man, who accomplished his duties without fanfare, and was a natural aviator. As a Flight Lt. in 1943, then a navigator returning to base in a Lancaster Bomber over the North Sea at 20 000 feet, after a raid, he happened to discover an unusually strong wind never before experienced, but he believed in his calculations. The skipper also believed in him and steered accordingly. It was called then the night of the big wind, which is now known as the Jet Stream. Their aircraft was thus the only one that returned to base that night at East Kirby, Lincolnshire, England. The rest of the stream drifted toward the Rhine where many were shot down while others ran out of fuel and crashed into the English Channel. A night of great loss of lives and of aircraft.
In civilian life, he became a Senior Captain for British Airways and showed the flag on all five continents with 29 000 hours spent in the air above the earth. He retired in his corner of Nova Scotia, very happy in idyllic peace and beauty surrounded by trees and water – his hundreds of books and classical music. To the family he was and will remain a fine example.
Hubert’s body has been cremated under the direction of Chandlers’ Funeral Home, Liverpool where online condolences may be made to www.chandlersfuneral.com
In memory of a great flyer we dedicate this poem by G. Magee 412 SQ. RCAF
“High Flight”
Oh! I have slipped the surly bonds of earth
And danced the skies on laughter-silvered wings
And joined the tumbling mirth
Of sun-split clouds – and done a 100 things
You have not dreamed of –
Wheeled and soared and swung
High in the sun-lit silence. Hov’ring there
I’ve chased the shouting wind along, and flung
My eager craft through footless halls of air.
Up, Up the long delirious, burning blue
I’ve topped the windswept heights with easy grace
Where never ark, or even eagle flew –
And while with silent lifting mind I’ve trod
The night untrespassed sanctity of space,
Put out my hand and touched the face of God.