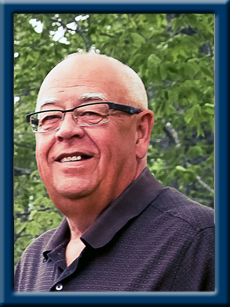 John Charles Welch – but known to his friends as Charles or Charlie- passed away peacefully September 17th with the people who loved him most at his side. He was born in Woodstock NB on April 21st 1949 to John and Jean Welch. He had many roles over his 72 years. For the past 50 years he was a husband to Anne, father to Melanie (Brian), Adrienne (Roma) and Jay. He was Papa to Jillian, Ruari, Max, Wynn and Eric. He was a brother to Larry (Charlene), Gary and David (Jennifer). He was an uncle to many and a friend to all.

Charlie has many successes in his life that we were all proud of him for. He strived to make his community better for everyone through his work and volunteer activities. He was a local businessman, former  Town councilor and held the position of Deputy Mayor. He was a member of the Kinsmen for many years, served on the Downtown Better Business Commission, School Board and was a minor hockey coach to name just a few- there are so many more. The list of his accomplishments is long and his impact and work continues to be seen in our community today.

Charlie’s biggest accomplishment was his family. He loved to spend time with his family and absolutely could not get enough of his five grandchildren. If you ran into him he would no doubt show you a picture or tell you a story about one of them. And when they were at Papas chances are he looked the other way when they snuck an extra treat from the cupboard. To say he was proud of Jillian, Ruari, Max, Wynn and Eric was an understatement

When his own three children Melanie, Adrienne and Jay were growing up he made sure they understood the importance of being true to yourself, not taking yourself too seriously and made sure they always new how much he loved them. Brian and Roma quickly became part of his inner circle and he treated them as his own.

Charlie and Anne recently celebrated their 50th wedding anniversary where he recalled the story of their first date- a blind date and how lucky he was to have accepted it. Together they lived in PEI, NB , a couple small towns in Nova Scotia before they settled in Liverpool where they have happily resided for the past 40 plus years. They have  shared a beautiful life together that saw them through many adventures.

Family was important to Charlie and made sure his family knew this. He enjoyed many laughs and visits with his brothers, Larry, Gary, Dave , his many sister & brother in laws and his many nieces and nephews. Uncle Charlie was proud of them all.

Charlie was preceded by his mother and father and brother Gary.

Visitation will be held from 6:00 -7:00 pm Wednesday, September 22nd, followed by a celebration of Charlie’s life and a reception at 7:00 pm, all from Chandlers’ Funeral Home, Liverpool. All those attending Charlie’s service are asked to bring a mask, practice social distancing wherever possible, hand sanitize and provide the funeral staff with contact tracing information. Family flowers only. If you would like to honor Charlie’s memory you can make a donation to the Queens General Hospital Foundation or a charity of your choice and tell the people you love what they mean to you . To share memories or condolences, please visit www.chandlersfuneral.com

To the neighbors and friends who have surrounded and supported Charlie, Anne and our family these past four weeks we are forever grateful – thank you.

Our sincere thanks to the nurses doctors and the entire staff of Queens General Hospital who made his stay there so comfortable. To the the doctors, nurses and staff at the QEII VG 6A and 3A many thanks for the immeasurable kindness and support you showed him and us these last few days.

There are no words to describe the loss we feel. He will live forever in our hearts and memories

Offer Condolence for the family of Welch; John “Charles”