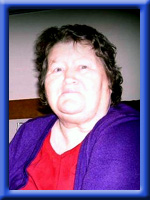 WEAVER – Loretta P., 74, of Milton Queens County passed away peacefully in North Queens Nursing Home, Caledonia on July 5th, 2011.
Born in Liverpool, she was the daughter of the late Stewart and Margaret (Baker)(Conrad) Young.
Loretta worked for the former Wong’s Restaurant in Liverpool as well as National Sea Products. She loved animals and enjoyed bingo. She will be fondly remembered as a fun loving, easy going person.
She is survived by her sons David (Barbara) of Milton; Stephen of Liverpool and Shawn (Sara Everett) of Lower Sackville; brothers: Robert (Thelma) Young of Mersey Point and Roland of Ontario. 4 Grandchildren and 2 great-grandchildren. A number of nieces and nephews.
She was predeceased by her husband Gordon, daughter Valerie Conrad, son Kevin and sister Faith.
A private graveside service will be held Sunday, July 10th, 2011 in Milton Community Cemetery.
Donations may be made to North Queens Nursing Home, Caledonia, the Canadian Diabetes Association, or The Canadian Cancer Society. Online condolences may be made to www.chandlersfuneral.com

Offer Condolence for the family of Weaver; Loretta Pauline