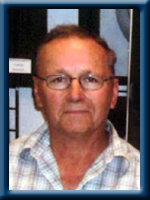 WEARE – Roger Phineas, 63, of Caledonia, Queens County, passed away Friday, September 19, 2014 in hospital with family by his side. Born in Caledonia, he was a son of Avis Irene (Canning) Weare of Caledonia and the late Theodore Alva Weare. Roger was an honest and hard-working man, who took pride in those qualities and tried to instill them in others. His last words to his grandson, Kerwyn were “always be honest”. He enjoyed his grandchildren, fishing, playing hockey, baseball and golfing with friends. He enjoyed family vacations with his children and grandchildren. As a young man, he had a passion to own and operate his own fleet of logging trucks and, in his later years, he was able to make that dream a reality by owning and operating his own Western Star log truck that he very proud of. He began his career at a very young age working in the woods with his father and brothers. As newlyweds, he and his wife, Joanne, went to the States to pick apples for a down payment on their first home. Shortly after returning to Caledonia, he and his brother Alva, started a logging business contracting for Bowater Mersey Paper Co.. After seven years, Roger and his brother each formed their own company with Bowater. In 2001, Roger incorporated with his son Christopher, to form R & C Weare Logging Ltd., which Christopher will proudly continue to operate, carrying on his father’s legacy. Roger was a fourth generation logger. His father, grandfather and great grandfather all made their living in the woods. R & C Weare Logging employs 30 members of the local community. Roger, a very community minded person, had wanted to do something for the local area. In 2012, his family opened The Hollow Log Cafe, operated by his daughter, Cindy. He has been a long time supporter of the community by sponsoring events and donating to local organizations such as the Caledonia Fire Department, Caledonia Exhibition, A.L. Patterson Branch, #87 Royal Canadian Legion, Caledonia and the local school. Roger will be sadly missed by his wife of 42 years, Joanne (Forrest); daughter Cindy (Chris) Ross, son Christopher (Jennifer); grandchildren Shayla, Alexandria, Kerwyn, Olivia and Lauren; sisters Mary (Delbert) Weare, Anna (Howard) Mansfield, Eva (Alan) Zong, Cheryl (Benson) Frail; brothers Alva (Louise) Ward and Floyd. Many nieces and nephews and other family members and friends. He was predeceased by an infant grandson, his sisters Yvonne and Paulette and by brothers Maynard and Terry. At Roger’s request, there will be no visitation. Funeral service will be Tuesday, September 23, 2014 at 2;00 p.m. in Caledonia United Church. Reverend Carol Smith officiating. Burial will be in Harmony Cemetery. No flowers by request, donations may be made in Roger’s memory at the Royal Bank (Transit: 01213, Account: 5075338) for a community project for children to be built at a later date. The family wish to express their gratitude and thanks to the nurses at the VG Site, 8A, Hematology Unit and a very special thank you to Dr. Jennie. Online condolences may be made to www.chandlersfuneral.com

Offer Condolence for the family of Weare; Roger Phineas