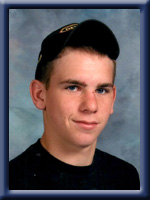 WEARE – Jason Austin, 15, of Caledonia, passed away suddenly (surrounded by some of his closest friends) as a result of an ATV accident in North Brookfield on June 7th, 2011.
He was a son of Floyd and Colleen (Mailman) Weare and was raised in North Brookfield with his family.
Jason was a student at North Queens Rural High School and was a member of the Western Nova Scotia Horse Association. He enjoyed hunting, fishing, working in the woods and 4 wheelin’ with his friends Tristan M., Tristan C., Jessie and Jordan. Jason spent a lot of his time with his family and was especially passionate about his pulling horse, Ben. He will be forever remembered by friends and family as a young man who loved to make others laugh.
Surviving besides his parents are his sister Pennie and brothers Theodore and Nicholas, all at home. His paternal grandmother Avis (Canning) Weare of West Caledonia and maternal grandmother Bonnie (Simpson) Mailman of North Brookfield.
He was predeceased by his paternal grandfather Theodore Weare and his maternal grandfather Albert Mailman.
Visitation will be Saturday, June 11th, 2011 from 7 until 9 p.m. in Chandlers’ Funeral Home, Liverpool. Funeral service will be Sunday, June 12th, 2011 at 2:00 p.m. from North Brookfield United Baptist Church. Pastor Wade Harvey officiating. Burial will be in Hillcrest Cemetery, Westfield. Family flowers only, donations may be made to Queens County Horse and Pony Club or the Western NS Horse Association. Online condolences may be made to www.chandlersfuneral.com

Offer Condolence for the family of Weare; Jason Austin