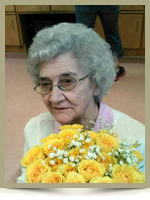 WEARE – Blossom M., 83, of Caledonia, passed away peacefully in North Queens Nursing Home, Caledonia on Tuesday, March 24, 2015.
Born in Ninevah, Lunenburg County, she was a daughter of the late Pearl and Cynthia (Tufts) Smith.
Blossom was a former employee with North Queens Nursing Home for over 20 years.
She is survived by her daughters Dale (Jimmy) Waterman of Caledonia, Jeannie Weare (Wayne Smith) of Bridgewater, sons Millage (Patricia) of Shelburne, Rex (Frances) and Harold (Sharon), both of Caledonia. 15 grandchildren and numerous great-grandchildren and great-great-grandchildren. Sisters Barbara (Gilbert) Falkenham of Maplewood, Lorna (Clayton) Corkum of New Germany, Margaret Herman of Bridgewater, Shirley Mosher, of Gold River, Bernice “Bonnie” Mailman of North Brookfield, brothers Clarence (Jenny) of Bridgewater, Billy of Simpson’s Corner.
She was predeceased by her husband Lionel, daughter Gwendolyn and an infant daughter, sons Danny, Sterling and an infant son, brothers Vernon and Seldon.
Visitation will be Friday, March 27, 2015 from 6 until 8 p.m. in Chandlers’ Funeral Chapel, Liverpool. Funeral service will be Saturday, March 28, 2015 at 2:00 p.m. in Caledonia United Baptist Church. Reverend John Boddy officiating. Burial will be in Hillcrest Cemetery, Westfield. Family flowers only, donations may be made to the Alzheimer’s Society of Nova Scotia. Online condolences may be made to www.chandlersfuneral.com

Offer Condolence for the family of Weare; Blossom May