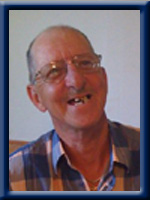 WEAGLE – S. Murdock “Doc”, 73, of Liverpool, passed away peacefully Sunday, August 7th, 2011 at Queens General Hospital, Liverpool with his children by his side.
Born in Liverpool, he was a son of the late Albert and Evelyn (Bell) Weagle.
Murdock began his sea career first on gypsum boats then sailed aboard scallop draggers; “Bickerton Pride”, “Flying Cloud”, “Mersey Enterprise” and “Mersey Seven” for over 35 years with Mersey Seafoods out of Liverpool which allowed him to travel to various ports of the world such as China, Portugal, Mexico and the US. When he was not out to sea and when he retired, Murdock enjoyed wood working, glass etching, listening to music and especially spending time with his family and his friends.
He is survived by his daughters Karen George of Dartmouth, Karla (Kendell) Colp of Beach Meadows. His son Kevin (Karen Dean) of Mersey Point. His grandchildren Ashley and Tanner George, Kennedy Colp and Aaron Weagle, Cody Whalen and Melissa Penny. His sisters Florence (Clair) Thistle of Liverpool, Ellen (Jack) MacLeod of Milton and Ann (Vernon) Sperry of Liverpool. His brother Albert “Jr” of Oromocto, NB.
He was predeceased by his sisters Phyllis and Dorothy Comeau.
At Murdock’s request, his body has been donated to science. Donations may be made to the Familial Adenomatous Polyposis, Desmoid Tumor Research Foundation at www.mountsinia.on.ca/care/fgicr/support or Mount Sinai Hospital Joseph and Wolf Lebovic Health Complex, 600 University Avenue, Toronto, ON, M5G-1X5 Tel: 416-596-4200. A private family service will be held at a later date. Online condolences may be made to www.chandlersfuneral.com.

Offer Condolence for the family of Weagle; Stanley Murdock “Doc”