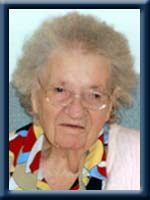 Born in Vogler’s Cove, she was a daughter of the late James and Lucy (Frank) Slauenwhite.

Mae was a custodian for the former Danesville School in her early years. She was a member of Danesville United Church, the U.C.W., and she loved to knit.

Visitation will be Friday, May 25th, 2012 from 7 until 9 pm. in Chandlers’ Funeral Chapel, Liverpool. Funeral service will be Saturday, May 26th, 2012 at 11:00 a.m. in the Danesville United Church. Reverend Vivian Moores officiating. Burial will be in Croft Cemetery, Danesville. Family flowers only, donations may be made to the Danesville United Church. Online condolences may be made to www.chandlersfuneral.com

Offer Condolence for the family of Weagle; Mae Mildred