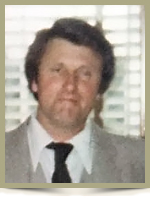 Born in Liverpool, he was a son of the late Owen and Mildred (Weagle) Weagle.

Keith was a truck driver for most of his life having to retire due to illness. His last employment was as a tractor trailer driver for Armour Transportation Systems where he became a member of the Million Miles Club for accident free service.

He is survived by his wife Darlene (Henley); his sons, Keith of Halifax, Jeffrey, at home, Frank, Richard (Patricia Fisher) and Kevin (Shelley) all of Brooklyn; three grandsons; one great grand daughter; Half sister, Vera Slauenwhite of Sweetland and half brother Sterling Connolly of Danesville.

He was predeceased by his brothers Wade and Archibald “Archie”.

Cremation has taken place under the direction of Chandlers’ Funeral Home, Liverpool. A celebration of Keith’s life will be held at a later date. Donations may be made to the Alzheimer’s Society of Nova Scotia. Online condolences may be made to www.chandlersfuneral.com

Offer Condolence for the family of Weagle; Keith Robinson