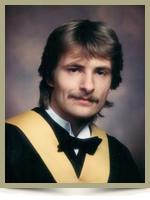 Born in Liverpool, he was a son of Arnold and Carolyn (Huskins) Weagle, of Liverpool.

He was a longtime employee at the Liverpool Pizzeria. Dwayne was a big rock and roll fan and he loved going to many rock concerts over the years. He also loved to play guitar and sing at karaoke and with his band. He had many hobbies, such as playing darts, bowling, baseball and he was known for his ability to solve the rubik cube in limited time. In his younger years Dwayne also enjoyed acting and at one time played the lead role in the Winds of Change production of Oliver.

He is survived by his loving companion, Michelle Scobey; brother, Shaun, of Liverpool; maternal grandmother, Alice Huskins, of Liverpool.

He was predeceased by a daughter Kayla Elizabeth in infancy; maternal grandfather, Arnold Huskins; paternal grandparents Agnes and Harold Whynot.

A Celebration of Dwayne’s Life will be held on Tuesday, December 9th, 2014, at 11:00 a.m., from Chandlers’ Funeral Home, Liverpool, followed by a reception. Pastor Russell Prime officiating. Burial will be in Oceanside Cemetery, Hunts Point. Family flowers only. Donations may be made to the Canadian Cancer Society or to the Queens General Hospital Foundation. Online condolences may be made to the family at www.chandlersfuneral.com

Offer Condolence for the family of Weagle, Dwayne Arnold