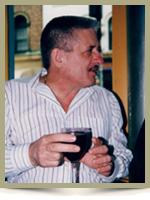 John Smith Watts, Liverpool and Dartmouth.
Son, brother, uncle, friend, soldier, basketball coach, and referee, sports fisherman, golfer, avid collector of jokers, drafting technician, chef and proud father of his daughter Kathy.
John passed away on May 2, 2011
John was born in Pictou, NS in 1941, the son of Mary Natalie (DeCoste) Watts and William Nathaniel Smith Watts. His father was sent overseas as Regimental Sergeant Major of the North Nova Scotia Regiment shortly after John was born. John spent his early years with his mother, sister and grandparents in Pictou.
John was five when the family moved to Liverpool after the war. Upon completion of high school in Liverpool he attended the Saint John Technical Institute in Saint John, NB, graduating as a drafting technician. He returned to Liverpool to work at Steel and Engine Products Limited.
John joined the 133rd Battery, 14th Field Regiment Militia (Artillery) in 1963 as a 2/Lt and at the time of the Battery’s dissolution in late 1969 had been awarded the rank of Captain. A member of Somme Branch, Canadian Legion in Dartmouth, John was an accomplished pool player and leaves behind many friends and good times.
Always an avid follower of basketball, John coached men’s teams in Liverpool in the 1960s and 1970s. His teams won several Nova Scotia Championships, culminating in a Maritime Intermediate B Crown in 1973 and that team has been inducted in the Queens County Sports Hall of Fame. John was also a stand-out basketball referee in the same timeframe.
John decided on a career change in 1985 and attended the Nova Scotia Institute of Technology in Halifax to study to be a chef. After graduation he worked for some time at White Point Beach Lodge, later moving to Dartmouth where he was chef in the Keddy’s Motel Chain and at the Apple Barrel Restaurant in Halifax.
He is survived by his life partner, Carol Anne Hatt of Liverpool, his daughter Katherine Angela (Wayne Warrington) Watts of Dartmouth, his sister Sally Ann (Maurice) Lloyd of Dartmouth, his niece Moira (Scott) Fry, his nephew Charles (Georgia) Lloyd and his three grand nieces and two grand nephews, all of Dartmouth. He will also be missed by Carol Anne’s children Lisa (Greg) Killam and Shane (Holly) Hatt of Liverpool. He was predeceased by his father and mother.
A Celebration of John’s life will be held Friday, May 6th, 2011, at 3:00 P.M., from St. Gregory’s Catholic Church, Liverpool. Father Brian Murphy officiating. Family flowers only, a donation may be made to the Junior Diabetic Research Foundation or to a charity of your choice. Online condolences may be made to the family at www.chandlersfuneral.com or via e-mail to carolannehatt@msn.com, kathywatts123@eastlink.ca, or sallyl@atlanplan.com

Offer Condolence for the family of Watts; John Smith