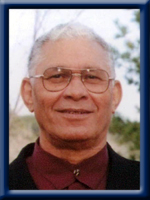 Terrance Ford Warrington, 74, of Milton, formerly of Mersey Point, Queens County, passed away peacefully in Queens General Hospital, Liverpool on Saturday, April 27th, 2013 with his family by his side.

Born in Liverpool, he was a son of the late Houlton and Clara (Morrison) Warrington.

Terrance worked at the former Mersey Tavern for five years, lobstered for five years and painted for forty years until he had to retire due to health issues. Terrance was larger than life and enjoyed every minute of it. He loved his weekly card games, talking to his sister Judy and most of all his grandchildren.

He is survived by his daughter Tina (David) of Milton, his son Terry (Kim) of Liverpool, his sisters Judy (Terry) of Liverpool and Joyce of Halifax and his most cherished grandchildren Terrence-James “TJ”, Tristan, Shakira, Trey and Rashawn and many, many loving nieces and nephews.

He was predeceased by his wife of 36 years Rosalind (Saulnier), his sisters Beatrice, Myrtle, Bernice, his brothers Rodney, Stanley, Houlton Jr. and his niece Gaye as well as his nephews Randal and Vincent.

Visitation will be Wednesday, May 1st, 2013 from 7 until 9 p.m. and funeral service will be Thursday, May 2nd, 2013 at 11:00 a.m. both in Chandlers’ Funeral Chapel, Liverpool. Burial will be held at a later date. Donations may be made to the Heart and Stroke Foundation of Nova Scotia, The Nova Scotia Lung Association, the Canadian Cancer Society or to any charity. Online condolences may be made to www.chandlersfuneral.com

Offer Condolence for the family of Warrington; Terrance Ford