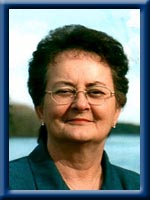 Born in Liverpool, she was a daughter of the late Hector and Evelyn (Levy) Saulnier.

Rosalind was a waitress for a number of years before becoming a P.C.W. and working for Queens Manor, Liverpool for seven years. She enjoyed cooking and baking as well as crafts and yard sales but, most of all, she enjoyed the time spent with her grandchildren.

She was predeceased by her brother Roy.

Visitation will be Thursday, March 18th, 2010 from 7 until 9 p.m. in Chandlers’ Funeral Home, Liverpool. Funeral service will be Friday, March 19th, 2010 at 11:00 a.m. in St. Gregory’s Catholic Church, Liverpool. Father Brian Murphy officiating. Burial will be in St. Gregory’s Catholic Cemetery, College Street, Liverpool. Reception to follow at the Liverpool Fire Hall. Family flowers only, donations may be made to Queens Manor Auxiliary or to any charity. Online condolences may be made to www.chandlersfuneral.com

Offer Condolence for the family of Warrington, Rosalind Irene