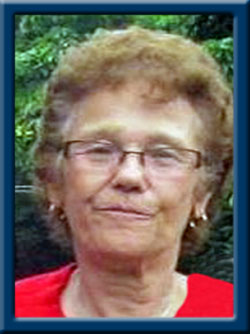 WARRINGTON – Judith Elizabeth, 71, of Liverpool, Queens County, passed away suddenly in South Shore Regional Hospital, Bridgewater on Saturday, April 2, 2016.
Born in Liverpool, she was daughter of the late Houlton and Clara (Morrison) Warrington.
Judy worked in housekeeping for the former Fahie’s Nursing Home, Liverpool and Queens Manor, Liverpool for a number of years. She enjoyed playing cards and spending time with family and friends especially her grandchildren. She enjoyed cooking, but, in particular, baking bread.
She is survived by her companion Terry Whynot, her daughters Wendy (Sean) Boston of Brampton, ON, Darlene (Brian) Abutti of Toronto, ON., her son Fred of Bedford, NS., grandchildren Brian and Brianna Abutti, Lynden and Andrei Boston, Olivia and Victoria Warrington; her sister Joyce Warrington of Halifax and numerous sisters and brothers-in-law and nieces, nephews and cousins.
She was predeceased by her husband Frederick, her mother-in-law Ada White; her sisters Bernice, Beatrice and Myrtle and her brothers Stanley, Houlton Jr., Terrance and Rodney.
Visitation will be Tuesday, April 5, 2016 from 7 until 9 p.m. and funeral service will be Wednesday, April 6, 2016 at 2:00 p.m., both in Chandlers’ Funeral Chapel, Liverpool. No flowers by request, donations may be made to the IWK-Grace Hospital, Halifax. Online condolences may be made to www.chandlersfuneral.com

Offer Condolence for the family of Warrington; Judith Elizabeth