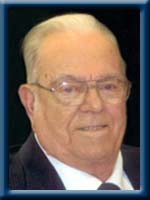 Bud, as he was known to his friends and family, was owner/operator of Wamboldt’s Texaco, later becoming Wamboldt’s Irving in Milton from 1968 to 1979. In late years, at his home in Port Howe, he did piecework for Seagull Pewter, Pugwash, for over twenty years. In his spare time, he loved to work on outdoor projects with his tractor and inside his workshop. Bud was a member and Past Master of Prince of Wales Lodge #29, Milton, A.F. & A.M.

He was predeceased by a brother George of Milton.

Cremation has taken place under the direction of Chandlers’ Funeral Home, Liverpool. Funeral Service and Masonic service will be held Tuesday, February 7th, 2012 at 2:00 p.m. both in Milton Baptist Church. Reverend Corey Pickens officiating. Burial will be in Milton Community Cemetery. Family flowers only , donations may be made to the Milton Baptist Church or the Prince of Wales Lodge #29, Milton, A.F. & A. M.. Online condolences may be made to www.chandlersfuneral.com

Offer Condolence for the family of Wambolt; James Jeremiah