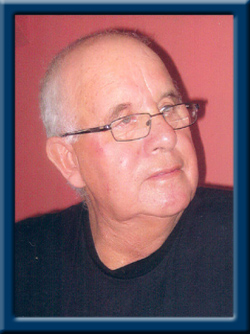 WAMBOLDT – Richard St. Clair
It is with great sadness that we announce the passing of our beloved father Richard St. Clair Wamboldt on Saturday, November 19, 2016 .
Born in Milton, he was a son of the late Alvin and Seattle (Labrador) Wamboldt.
Known as Dick to his family and friends, he went to work at Steel and Engine Products Limited (STENPRO) at a young age. There, he learned to be a welder and became the best he could be at his chosen profession. Dick then married the love of his life, Eileen, and together they brought up five children. Dick left STENPRO in 1984 and opened his own welding business working very hard with Eileen constantly by his side. In addition to his welding business, Dick raised many cattle and other barnyard animals. He was director of the Queens County Fair for many years and also served as Fair president several times. He was a former member of the Canadian Hereford Association, served as trustee for the Milton Baptist Church, regularly attended the Mens Christian Fellowship and was a member of Acadia First Nations.
After receiving a new lease on life in 2008 with a gift of a new kidney, he enjoyed his life and family to the fullest. Our father will best be remembered as a loving father and grandfather. He was extremely proud of all his children and grandchildren and, we, in turn, both loved and adored him. We are heartbroken to say goodbye.
Surviving are his daughters Wendy (Lloyd) Borden of Greenfield; Pam (Wayne) Westhaver of White Point Road; Heather (Mike) Ferguson of Milton; his sons John of Brooklyn, Terry of Liverpool; his grandchildren Ben, Lesley, Amanda Beth, Michael, Megan, Jeffrey and Jody; his great grandchildren Jade, Theodore and Harrison. His sisters Arlene (Buddy) Greenough of Bridgewater; Katherine (William) Archibald of Ontario; his brothers Lindy (Ellen) of Milton; Alvin (Pat) of Dartmouth and many nieces and nephews.
Dick was predeceased by his wife Eileen (Wambolt); his sister Olive Thompkins and his brothers Virgil, Ronald, Charles, Robert, Gene, Currie and infant brother Gary.
Cremation has taken place under the direction of Chandlers’ Funeral Home, Liverpool. Funeral service will be held Wednesday, November 23, 2016 at 2:00 p.m. in Milton Baptist Church. Reverend Terry Brewer officiating. Burial will be in Milton Community Cemetery. Reception to follow in Milton Baptist Church. Family flowers only, donations may be made to the Milton Baptist Church, Queens General Hospital Foundation or the Kidney Foundation. Online condolences may be made to www.chandlersfuneral.com

Offer Condolence for the family of Wamboldt; Richard St. Clair