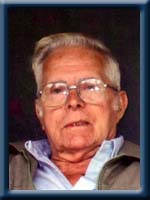 Wamboldt- Douglas Carmen, 80, of Milton, Queens County, passed away peacefully in Harbourview Haven,  Lunenburg on Thursday, June 14th, 2012 with his family by his side.

Born in Milton, he was the son of the late Cecil and Beatrice (Muree) Wamboldt.

Doug was a long time employee with STENPRO Liverpool, working as a carpentry foreman up until his retirement.

He is survived by his wife Elsie (Croft), daughters Sally Martin and Susan (Christopher) Whynot  both of Milton, Beverly Roy of Liverpool. Son Douglas (Valerie) of Brooklyn. Daughter in law Carlie Croft of Milton as well as many grandchildren and great grandchildren. Sisters Inez (Charles) Eaton of Milton, Marion Gardner of Ontario, Kathleen Yuill of Alberta. Brothers Donald (Gail) of Toronto, Roger (Geraldine) and Lloyd, both of Milton.

He was predeceased by his son Borden, brothers George and James “Bud”.

Cremation has taken place under the direction of Chandlers’ Funeral Home, Liverpool, A graveside funeral service will be held Tuesday, June 19th, 2012 at 2:00 p.m. in Milton Community Cemetery, Milton.. No flowers by request. Donations may be made to Harbourview Haven, Lunenburg or the Spina Bifida and Hydrocephalus Association of Nova Scotia. Online condolences may be made to www.chandlersfuneral.com.

Offer Condolence for the family of Wamboldt; Douglas Carmen