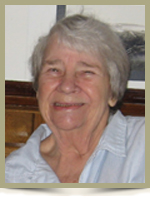 Wallace, Gladys Marian It is with great sadness that the family of Gladys Wallace announce her passing on February 11th, 2014 at the Queens General Hospital, Liverpool. Born in Toronto on  September 28th, 1931, she was the only daughter of the late Alfred and Marjorie Tasker of Toronto. She is survived by her husband of 43 years Kelvin Wallace, grandson Jason Robert Walker and her daughter-in –law Sue Dawn. She was predeceased by her son, Stephen Robert Walker . Gladys was employed in Toronto by CBC Radio Canada for more than 30 years and she was very proud to have worked there. In 2005 Gladys & Kelvin followed their dream and moved to Liverpool, NS. She enjoyed travelling, shopping and movies, but above all she so loved her cats. Donations can be made to the Liverpool SPCA .Online condolences maybe made to www.chandlersfuneral.com

Offer Condolence for the family of Wallace – Gladys Marian