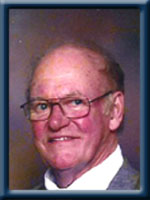 Born in Middleton, he was a son of the late Gladney and Leta (Wilkins) Walker.

He spent most of his life working in construction as a drywaller. Donald was an army veteran and was also member of the Mersey Branch #38, Royal Canadian Legion, Liverpool. He enjoyed playng cards, pool, darts, horseshoes and camping in Hibernia.

He was predeceased by his loving wife, the former Audrey Hatt; son, Kevin.

Cremation has taken place under the direction of Chandlers’ Funeral and Cremation Service, Liverpool. A celebration of Don’s life will be held on Sunday, April 17th, 2016, at the Mersey Branch #38, Royal Canadian Legion, Liverpool, at 2 pm.
No flowers by request. Donations may be made to a charity of your choice.
To share memories or condolences, please visit www.chandlersfuneral.com

The family would like to say a special thank you to Dr. Jenifer MacDonald and the staff of the Queens General Hospital for their excellent care.

Offer Condolence for the family of Walker; Donald Gladney