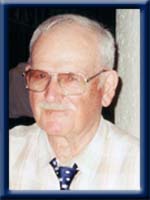 Born in White Point, Queens County, he was a son of the late Ambrose and Margaret (Robertson) Verge.

During the Second World War, Lawrence served with the Royal Canadian Air Force and was stationed in Labrador. Following the war, Lawrence worked for Bowater Mersey Paper Company starting in the Control Department moving up to chief  tester and later as the mill statistician. He was a member of the Liverpool Golf and Country Club for over 50 years and was club champion many times. He also loved to compete at the provincial level, either individually or, with his wife Kay, in mixed tournaments. He was a member of the Atlantic Seniors Golf Association and in 2000  was made an honorary lifetime member.

Lawrence loved the outdoors and spent all his spare time on the golf course, gardening, hunting, or taking long walks with Kay. He will be most remembered by his family and friends for his quiet, gentlemanly manner and his delightfully unique sense of humor.

He is survived by his daughters Katherine of San Diego; Virginia (Sandra Conrad) of Mahone Bay and his son Larry of London, UK.

He was predeceased by his wife of 64 years Kathleen (Leslie), his sisters Nora, Mabel and Marguerite and his brothers Joseph and Ambrose.

Cremation has taken place under the direction of Chandlers’ Funeral Home, Liverpool where funeral service will be held Friday, April 5th, 2013 at 11:00 a.m..  Chaplain Donald Lawton officiating  Burial will be in White Point Community Cemetery. Family flowers only, donations may be made to any charity. Online condolences may be made to www.chandlersfuneral.com

Offer Condolence for the family of Verge; Lawrence Mitchell