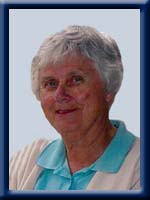 Born in Eagle Head, Queens County, she was the daughter of the late Perry and Joyce (Lohnes) Leslie.

Kathleen was a long time member of St. James Anglican Church in Hunts Point and served as treasurer of the church. She was an avid golfer and was the Liverpool Women’s Golf Champion many times. She represented the province as a member of the N.S. golf team at the Canadian Senior Women’s Golf Championship at Lingan Golf Club in Sydney, N.S. in 1980. She won the Atlantic Canada Seniors Ladies Championship and was the first winner of the newly formed tournament in 1984. She enjoyed travelling, cooking, crafts and evening walks with her husband Lawrence.

She is survived by her husband of 62 years, Lawrence , daughters Katherine of San Diego, Virginia ( Sandra Conrad) of Mahone Bay. Her son Larry of London, England. Her sister Verna Hemeon of Maine, Brothers Joseph (Evelyn) and Sydney (Lola) both of Hamilton. ON.

She was predeceased by brother Willard.

Cremation has taken place under the direction of Chandlers’ Funeral Home, Liverpool. Funeral service will be held Thursday, September 27th, 2012 at 2.00 p.m. in St. James Anglican Church, Hunts Point. Chaplain Donald Lawton officiating. Burial will be at a later date. No flowers by request, donations may be made to the Alzheimer’s Society of Nova Scotia. Online condolences may be made to www.chandlersfuneral.com.

Offer Condolence for the family of Verge; Kathleen Emma