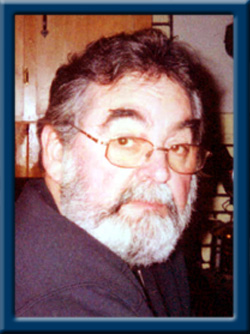 Veinot – John Kenneth “Jack” – born March 21st, 1941, in Liverpool as the only son of Charlie and Lillian (Wamboldt) Veinot, died peacefully in his sleep December 14th, 2022 in Bangs Falls at the age of 81 after a 6 year battle with cancer.
Jack was a bona fide outdoorsman and was the true meaning of “Mountain Man”. He was a simple man, liked simple things and was content as long as his grass was mowed properly, he had a good supply of duct tape, the flies weren’t too thick and he had lots of wood! He left school at a very young age to be with his best friend – his Father. They worked along side each other in the woods, guiding, hunting and fishing, going on many adventures that even turned into songs Dad wrote, the most famous one about fishing Pes’ West Brook. Once he was old enough to drive, he loved racing cars down Happy Landing with his good buddies Calvin and Kenny. As a young man, Jack had many jobs – working at the Mersey Hotel, Al Sapp’s Economy Market and the Bowlmore Lanes where he was manager before he got on at Bowater Mersey on the Paper Machines in 1964 until his retirement in 1996.
Dad was an avid storyteller about the old days, and had a great memory, probably from years of writing in his daily journal which he kept up until days before he passed. Funny enough, he could never remember an important date! He spent the first half of his life with his first wife Rita and they raised 4 beautiful children, Scott, Peter, Jamie and Heather. He was proud of his home down at the bottom of King Street on the Mersey, where he kept the best mowed lawn in the neighbourhood, but his heart belonged in Bangs Falls out at the camp. He loved to entertain his friends and family with his beloved “Mansfield” guitar and would say “we’re goin’ on down to Nashville” and he’d sing his favourites by Merle Haggard, Willie Nelson and Johnny Cash. There was always a fire going outside because Dad loved wood! He loved to cut it, burn it, build with it or carve it. As long as he had plenty, he was happy. Dad loved to display all of his carvings throughout his yard, and if anyone asked for one.. he’d say take it!. He became well known for his chainsaw owls and boats.
Dad spent the second half of his life with his 2nd wife Evelyn, and he had found his soul mate. They were two peas in a pod who loved to hunt and fish together and enjoyed many trips to Newfoundland. They built a little house and settled on Bangs Falls where they were happy for over 30 years. He also gained 3 step children, Helen, Darlene and Greg. His door was always open to all of his friends who popped by, and he had many. He was well loved. Dad will be sadly missed by his sisters Peggy Hatt (Richard), who he called every day, and Leanne White (Stephen),his “Little Lee” who he adored.
He is survived by his loving wife Evelyn, and his children Scott (Rose) of Pennsylvania, Peter (Brenda Lee) of Edmonton, Jamie (Carla) of Halifax ,Heather Stevens (John) of Port Medway and stepdaughters Helen Baker and Darlene (Robie) Murphy of Liverpool. His beloved grandchildren Ryan, Adam and Patrick Veinot, Katyrose and Julia Veinot, Gabe, Jess and Noah Stevens. Great-grandchildren Maryjane, Jordan, McKenna and Kayden. Step-grandchildren Renee Gallant, Heidi and Frankie Malone, Paul Baker and Sarah Giesbrecht. Step-great grandchildren Ryker, Jasmine,Lucas, Amarah, Kaiden, Carter, Nixon, Dylan, Colton and Abigail
He was predeceased by his parents, sister Barbara Roy and step-son Greg Baker.
Cremation has taken place under the direction of Chandlers’ Funeral Home, Liverpool. No funeral service at Jack’s request. There will be a private family burial in the summer and a celebration of life to follow in Bangs Falls. Memorial Donations can be made to the Canadian Cancer Society or the MS society. Online condolences may be made to www.chandlersfuneral.com.
Special thanks to all the doctors and nurses who helped Dad these last 6 years, great friends Larry Connolly and David Booth for always being there, and to our special VON nurse Carolyn Holdright who made Dad feel safe, and dignified.

Offer Condolence for the family of Veinot – John Kenneth “Jack”