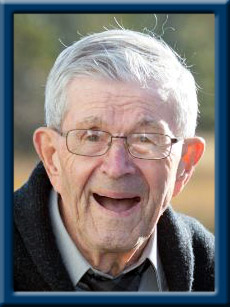 Veinot, Esmond Atwood “Ted”, 89 of Liverpool, passed away peacefully on January 16th, 2020.
Born in Milton, he was the son of the late Freeman and Hazel (Croft) Veinot.
Ted lived a full life in his 89 years. Ted left school at the age of 14 to start a part time job at the Liverpool Advance delivering papers. This, his very first paying job, started his life long career in the news print industry. Ted worked as a type setter six years at the Yarmouth Herald in Yarmouth, and five years at the Telegraph Journal in Saint John before returning home to Liverpool to work at The Advance until Ted and his brother Richard started their own printing business, Veinot’s Print, in Sandy Cove and successfully ran that business until their retirement. Ted and Mildred also had their own convenience store, “Ted’s Mart” which they ran for several years next to their home in Liverpool.
Ted was an honorary member of the Liverpool Fire Department for over 16 years. Ted played numerous sports, starting at a young age and right through to his retirement years. Finding himself too small to be effective at hockey, Ted’s interests soon turned to baseball, a game which he played for many decades. Ted was also fond of curling and when he was no longer able to play himself, he tuned in to every game he could and enjoyed watching National tournaments live in Halifax and Saint John on several occasions.
Ted also spent a great deal of his time in the woods hunting and fishing. The cottage on Hibernia Rd holds many treasured memories. So many stories can be told of his fishing adventures and his “catch (or should we say – catches!) of the day”, or how many rabbits, bears, and deer have been harvested throughout the years. When times slowed down for Ted, he turned to woodworking projects, and his puzzles for a source of enjoyment. Hundreds of puzzles were completed by Ted in his later years.
Ted’s greatest source of joy was his family. His devoted wife Mildred and two daughters Merla and Susan, his grand-son Blair, great grand-children Lindsay and Jeremy and especially his great grandson Ethan, with whom he has always shared a special bond. His family always included furry friends as well, Ted never met a dog he didn’t like, or who didn’t like him.
Ted is survived by his daughters Merla Hanley, Port Mouton, NS; Susan Veinot (Kimberly Doggett), Saint John, NB; grandson Blair (Wendy) Whynot, Caledonia, NS; great grandchildren Ethan Whynot, Caledonia, NS; Jeremy Thorbourne, Liverpool, NS; and Lindsay (Walter Lowe) Liverpool, NS.
Ted was predeceased by his wife of 59 years, Mildred (Moulton) Veinot, brother Richard Veinot, and sister Annabelle Rafuse.
Cremation has taken place under the direction of Chandlers’ Funeral Home, Liverpool, NS. A private family memorial service will be held at a later date. No flowers by request, donations in Ted’s memory may be made to the IWK Children’s Hospital, Halifax or charity of choice. Online condolences may be made to www.chandlersfuneral.com

Offer Condolence for the family of Veinot; Esmond Atwood “Ted”