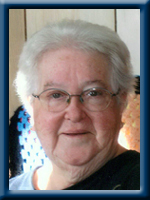 Offer Condolence for the family of Veinot; Blanche Bell