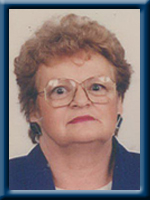 VAUGHN – Colette Lucienne, 82, formerly of Liverpool, passed away peacefully in North Queens Nursing Home, Caledonia on Monday, March 20, 2017.
Born in Quebec, she was a daughter of the late Rene and Marie Anna (Caron) Lambert.
Colette was a hairdresser for over forty years.
She is survived by her daughter Diane Parnell-Jones of Terrace, BC; her sons Daniel Parnell and David Parnell, both of Terrace, BC and Dennis Parnell of Calgary, AB. A number of grandchildren and great grandchildren; her sister Georgette Franklin of Chilliwack, BC, her nieces Michele Franklin and Darlene Anderson, her good friend Alice Melanson of Brooklyn.
Colette was predeceased by her husband Gary.
Cremation has taken place under the direction of Chandlers’ Funeral Home, Liverpool, At Colette’s request, there will be a private interment at a later date in the New Charleston Cemetery. No flowers by request, donations may be made to the Alzheimer Society of Nova Scotia. Online condolences may be made to www.chandlersfuneral.com.

Offer Condolence for the family of Vaughn; Colette Lucienne