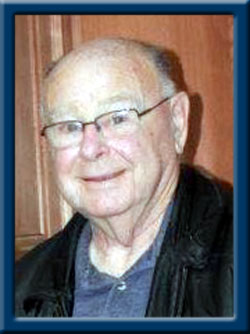 VAUGHAN – Robert “Bob”, 84, of Mill Village, Queens County, passed away peacefully on March 19, 2016 in Queens General Hospital, Liverpool with his niece, Dorothy, by his side.
Born in Mill Village, he was a son of the late J. Berton and Irene M. (Hiltz) Vaughan.
Bob served with the Royal Canadian Army Reserves for a number of years. He also worked at Michelin until his retirement. He was a member of the Mersey Branch #38, Royal Canadian Legion, Liverpool. Bob enjoyed fishing, going on scenic drives, visiting family and friends and loved to have company drop in for chats. He loved children and animals.
He is survived by his sisters Brenda, Irene and Dorothy.
He was predeceased by his wife Helen (Manthorne); his sisters Jennie Wolfe, Vera Manthorne, Alice Nickerson, Elizabeth Fralic, Nellie Norman and Geneviene Baker and his brothers James, Hardy, Berton, Wade and Laurie.
Cremation has taken place under the direction of Chandlers’ Funeral Home, Liverpool. A Legion Memorial service will be held at 3:00 p.m. Friday, April 15, 2016, followed by a funeral service both in Chandlers’ Funeral Chapel, Liverpool. Lay Minister Peter Anthony officiating. Reception to follow. Private family burial will be held at a later date. No flowers. Donations may be made to The Heart and Stroke Foundation of Nova Scotia, Canadian Diabetes Association or to Bethany United Church, Mill Village. Online condolences may be made to www.chandlersfuneral.com

Offer Condolence for the family of Vaughan; Robert “Bob”