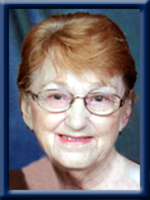 Born in Liverpool, she was a daughter of the late William “Bill” and Muriel (Allen) Evans.

Dorothy was a former employee with Peoples Department Store in Liverpool as well as Hillsview Acres in Middlefield. She had a passion for knitting sweaters and mittens for her family and loved baking, bingo, talking on the phone with family and friends, crime and mystery stories and TV shows and old classic country music. She enjoyed spending time with family and friends over coffee; keeping up with the “times of the town”. She was a member of the Liverpool United Baptist Church, having been baptized in March of 2012. She will be fondly remembered by her witty quotes and sayings as well as for her fondness for coconut cream pie.

She was predeceased by her son David, sister Marion Schwartz and brother George.

Cremation has taken place under the direction of Chandlers’ Funeral Home, Liverpool. Funeral service will be held Saturday, September 28th, 2013 at 11:00 a.m. in Liverpool United Baptist Church. Reverend Steven Hopper officiating. Burial will be at a later date. No flowers by request, donations may be made to the Liverpool United Baptist Church or the C.N.I.B. Online condolences may be made to www.chandlersfuneral.com

Offer Condolence for the family of Uhlman; Dorothy Mae