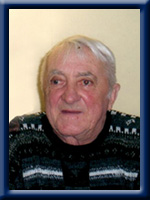 Born in Upper Chelsea, he was a son of the late Raymond and Ella (Baker) Uhlman.

Donald was a former worker with Milton Woodworkers. He enlisted in the Royal Canadian Army Corps during World War Two and served overseas. Following the war, he was employed with Bowater Mersey Paper Company Limited for over twenty years in the woodroom. He enjoyed hunting, fishing and working with his cattle and horses. He enjoyed spending time with his grandchildren and great grandchildren.

He is survived by his daughters Carol (J. William) McKnight and Diane (Gary) Oickle, both of Milton. His son Donald (Joanne) of Brooklyn. 8 grandchildren and 7 great grandchildren.  His sisters: Freda (Francis) Wolfe and  Pearle Goulden  both of Brooklyn. Joyce (William) Richards of Lunenburg, Donna (Ronald) Nauss of Green Bay. His brother Ronald (Betty) of Pleasantville.

He was predeceased by his wife the former Marion Legge and sisters Annie, Vivian, Margaret and Yvonne.

Visitation will be today (Thursday, August 19th, 2010) from 7 until 9 p.m. and funeral service will be Friday, August 20th, 2010 at 2:00 p.m. both in Chandlers’ Funeral Chapel, Liverpool. Pastor Bethe Benjamin-Cameron officiating. Burial will be in Milton Community Cemetery at a later date following cremation. Family flowers only, donations may be made to MS Society of Nova Scotia, Canadian Cancer Society or the Heart and Stroke Foundation of Nova Scotia. Online condolences may be made to www.chandlersfuneral.com

Offer Condolence for the family of Uhlman, Donald B.