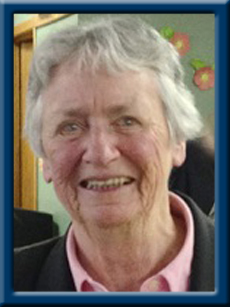 Kathleen Kinsman Tudor (nee Richardson) died on July 19, 2019, after a short illness, in Shelburne, Nova Scotia, at the age of 94. She was predeceased by her husband Bruce and eight of her nine siblings. She is survived by her three children, Martha, David (Nancy) and Rebecca (Lester), six grandchildren, Jakon, Jesse, Cora, Koby, Arlo, and Chloe, three great-grandchildren, Milo, Remy, and Sam, and her brother Karl (Pat).

Kathleen was born on February 7, 1925, in her beloved village of Pleasant Point, across the water from Lockeport, in the house she retired to and lived in until her death. Her father, a fisherman, had bought the house down the road from his parents. After completing grade 11 (the highest grade given then) in 1941, Kathleen took a two-week teacher training course and taught in a one-room school the next year. In 1942, she joined the RCAF(WD) and was assigned to Eastern Air Command Headquarters in Halifax. There she met her great friend Alison, whose family she lived with in Montreal when she took her veteran’s grant and went to Sir George Williams University, graduating in 1949. In 1947, she married Bruce, a fellow student; their union lasted more than 50 years, until his death. They both completed a teacher training diploma and taught in the Quebec school system for several years. In 1955, Kathleen, Bruce and their first child, Martha, sailed to England, where Kathleen taught for two years in a secondary modern school in London. There, David was born at home with the help of a midwife. Back in Montreal, Kathleen received her master’s degree, studying part-time, and their third child, Rebecca, was born. Later, in Toronto, she earned her PhD in English literature from the University of Toronto.

Kathleen was literary to the core and a champion of local writers. She taught at Saint Mary’s University for 20 years, having convinced the administration to add Creative Writing to its syllabus. Upon retirement she established Roseway Publishing, with a mandate to publish first-time South Shore authors. Hers was one of the first regional presses in the Maritimes and her authors won many awards. She was particularly proud of publishing, in 1992, Out of the Depths, Isabelle Knockwood’s harrowing account of life at the Schubenacadie Indian Residential School. Kathleen’s experience as a board member of Juniper House, a women’s shelter in Yarmouth, led her to hold workshops for women from across the province to encourage them to express their voices, which resulted in the 1996 publication of In the Open: Women Survivors of Abuse Tell Their Stories. More than one woman was afforded protection in Kathleen’s home over the years. Kathleen established Community Books to facilitate the publication of local histories, memoirs, stories, and poetry by authors both local and from across Canada. She worked to break down the stigma associated with self-publishing and would not consider works that were racist, sexist or offensive to other marginalized groups.

Her own published literary endeavours include six novels (Getting Away, Deep Roots, Dirty Deeds, The House on Burnt Hill, Innocents Die, The Forties Dress), short stories (Five Square Miles, Trouble in the Tropics), two CDs of short stories, read by herself (If It’s Not One Thing, It’s Another, The Life and Times of Jane Plusplus), and most recently a book of poetry (Undercurrents). Despite her many achievements, she exhibited a perhaps typical Maritime understatedness when it came to her own projects, but she was quick to encourage and extol the talents of others. Her creativity encompassed several avenues. With her good friend Peter Oliver, she hosted several Equinox Extravaganzas, always with a compelling theme, from garlic to theatre; she gathered hand-crafted lighthouses from across Nova Scotia for an outdoor exhibition in her field overlooking the water; she worked at portraying her beautiful view in watercolours; and she pursued numerous other artistic activities.

She cared deeply about her community (local and global) and gave back in many ways: she was on the board of the Shelburne County Arts Council, she taught English in the Gambia and in China, she fundraised for Stephen Lewis’s Grandmothers to Grandmothers in support of AIDS orphans in Africa, and she was involved in many local campaigns for social justice. In recent years she despaired of the state of the world we are leaving to our children.

Kathleen was her own woman, and in that she was a role model for her children and grandchildren and her many friends and acquaintances. She was a visionary, a committed socialist, a staunch atheist, a compassionate humanist, a beloved teacher, and an inspiring mentor. She was strong, loving, generous, creative and fun. She also had a fierce side that was felt by those who inadvertently crossed her. She was always up for a game of Spite and Malice, which she usually won. She was a force of nature and she will be deeply missed.

Kathleen’s family are very grateful to the doctors, nurses and staff at Roseway Hospital for their incredible care and compassion. A celebration of Kathleen’s life will be held on August 24 at 2 pm at her home at 322 Pleasant Point Road, RR1 Lockeport.

Offer Condolence for the family of Tudor, Kathleen Kinsman Richardson