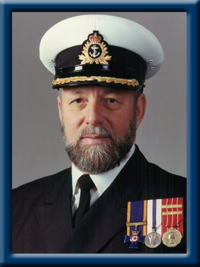 Truelove – Lawrence “Larry”: Lieutenant Commander, OMM, CD.Retired, age 86, of Milton, Queens County, passed away peacefully on Wednesday, June 2nd , 2021, at Queens General Hospital, Liverpool, N.S.
Born in Hamilton, Ontario, he was a son of the late Lawrence and Melissa (Middlebrook) Truelove.
Larry was raised in a family of eight children, attended school, and enrolled in the Royal Canadian Navy at age 17. Following graduation from Basic Training, he served in all ranks Ordinary Seaman to Chief Petty Officer, Boatswain, in nine warships and various bases and establishments.
In 1969 he was selected to undergo Officer training, following which he received a Queens Commission. He subsequently served at sea, and a variety of staff training and command positions from coast to coast.
Larry was promoted to the rank of Lieutenant Commander in 1975 and was appointed an Officer of the Order of Military Merit in 1976. He fully retired in July , 1990, after approximately 37 years of Military Service to his Country.
Larry was a “Sailor”. He always maintained a deep bond with the Navy,and a great admiration and respect for his “Shipmates”. He enjoyed the disciplined way of life and often said that no other career could have offered him the wonderful opportunity to work , travel extensively throughout the World and share an abundance of unique experiences, with so many “Great People”. He would have wanted no other career.
Following retirement to Milton, N.S., Larry remained active, serving as a village Commisioner, member of the Royal Canadian Legion, member of the The Massonic Order, Past Master, TIM, WCN, and Past President of South Shore Shrine Club (awarded the 55 year Massonic Jewel in 2014), Admiral Desmond Piers Naval Association, (Life Member and Chaplain), Life Member of the Atlantic Chiefs and petty Officers Association, in 2015 was awarded the Veteran’s Affairs Minister’s Commendation for service to Veterans. Larry was a member of numerous other military and civilian related clubs and organizations.
Larry was always pleased to perform the duties of Master of Ceremonies for “Remembrance Day” and “Battle of the Atlantic” Services, Reunions, Weddings and numerous charitable fund raising events and shows, ect. He enjoyed jogging, camping, curling, fishing, hunting, taking long walks and traveling and cruising with Cynthia, family members and many friends up until his health would not allow him to partake. Larry also loved to exchange jokes, share “Salty Dips” and play guitar and sing whenever opportunity presented itself. He loved Canada and all things Military.
Larry is survived by his loving wife of 66 years, Cynthia; daughter, Catherine Truelove (Dale Sewers) of London, Ontario; sons, Peter (Susan) of Crousetown, Brian (Bonnie) of Chester, William (Brenda) of the Netherlands; eleven grandchildren; seven great grandchildren; sister, Dorothy Edwards; brother, Gordon both of Hamilton, Ontario.
He was predeceased by sisters, Shirley, Ethel and Bonnie; brothers, Lloyd and George.
Cremation has taken place under the direction of Chandlers’ Funeral Home, Liverpool, NS. Due to COVID 19 there will be no visitation or service at this time. Donations may be made to Queens Manor, Liverpool, Queens General Hospital Foundation, Liverpool or to a charity of your choice. To share memories or condolences, please visit www.chandlersfuneral.com