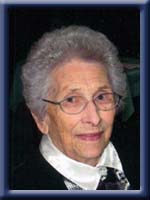 Born in Grand Prairie, AB, she was a daughter of the late Frank and Winnifred (Christopher) Freeman.

Irene graduated from Normal College in 1939 and taught school for over 40 years until her retirement in 1980. She was a life member of Milton Baptist Church and a founding member of the Queens Quilters. She was a member of the Gorham Chapter of the I.O.D.E. and past member of Arbutus Chapter # 30 Order of the Eastern Star.

She is survived by her son John (Elsa) of Milton and grandchildren, Kevin and Joanne (Terry), as well as step-grandchildren Shawn (Heather) and Krista (David); step-great-granddaughter Gracie Baker and a nephew Murray Freeman of Blockhouse.

She was predeceased by her husband John, infant sister Ruth and her brother William.

Visitation will be Thursday, March 22nd, 2012 from 7 until 9 p.m. in Chandlers’ Funeral Home, Liverpool. Funeral service will be Friday, March 23rd, 2012 at 11:00 a.m. in Milton Baptist Church. Reverend Corey Pickens officiating. Reception to follow in the church vestry. Burial to be held at a later date, following cremation. Family flowers only, donations may be made to Milton Baptist Church Memorial Fund. Online condolences may be made to www.chandlersfuneral.com

Offer Condolence for the family of Toplis; Irene Christopher