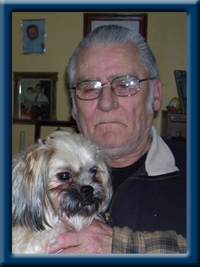 THORBURNE – Murray Clark, 86, of Charleston, Queens County, formerly of Liverpool, passed away peacefully in South Shore Regional Hospital, Bridgewater on August 28, 2022 with his loving family by his side.
Born in Liverpool, Murray was son of the late Gilbert and Grace (Foster) Thorburne.
Dad , as a young man, delivered telegraphs in and around Liverpool. Later, he enlisted, along with his brother David, doing a short stint in the reserves. After that, Dad worked in various woods camps around the province. He then went to work at Nickerson Brothers Fisheries in Port Mouton. Dad left there and went to work at C.W. MacLeod’s Fisheries where he became foreman, a position he held for over 30 years. Dad often spoke of never having made an enemy in all his years in that role. Dad was also a spare bartender and doorman at the Mersey Branch #38, Royal Canadian Legion in Liverpool working alongside the love of his life, Ruth. They did everything together! Dad enjoyed hunting, bowling, shooting pool, tinkering with cars, WWE wrestling, camping, raising a “few” farm animals, family gatherings, drives and a good nap!.
We all laugh about our car drives. We never knew where we were going or when we would be coming home. If it got late, Dad would pull over somewhere and rest for awhile. We woke up in some pretty strange places at times,! Driving down the road, all of us singing gospel and old country music at the top of our lungs; Dad being the loudest! Mom was Dad’s everything. Whatever Mom wanted, if he could make it happen for her, Dad did it. It was always good to have Mom in your corner ‘cause that meant you had Dad, too!
Dad had a love of animals, especially his three legged pooch, Susie. She went everywhere with him and will go with him on this final journey. Dad was really a quiet man; words were rarely needed. One knew by the expressions on his face whether he was happy or not.
Dad was always happiest to see the grandchildren and great grandchildren. It always put a smile on his face. Dad loved us all and was proud of each one of us. We love and miss you, Dad.
Surviving are the love of his life and wife of 65 years Ruth (Colp); his children Mary Emily of Liverpool; Michael (Marilyn) of Beech Hill; Lillian Thorburne (James Williams) of Carter’s Beach; Inez (Donald) Shupe of Charleston; Cynthia (Clinton Fisher) of Hunts Point; Wanda Himmelman (Peter Howard) of Sandy Cove; Andrew (Christina) of LaBelle and Cheryl of Liverpool, Grandchildren Adrienne “Sook” (Rory); Justin (Lisa); Ronnie, Colin (Kim), Kyle (Kayla), Megan, Christopher (Tiffany), Jacob, Kaitlin (Braden), Ryan, Michael, Leah, Austin, Dennis (Candace) and Jessi. Great grandchildren Bjorn, Nola, Oliver, Sawyer, Sophie, Haelyn, Dominic, Paige and Payton. His sister Mary Whynot of Liverpool and his brother David (Norma) of London, ON.
Besides his parents, Dad was predeceased by is daughter Angela Ruth; grandson Matthew Allen; Sisters Frances and Barbara and Doris Whynot. His brothers Harry, Douglas, Mark, Claude, Vincent, Charles and Gerald.
Cremation has taken place under the direction of Chandlers’ Funeral Home, Liverpool, NS. A graveside memorial service will be held Monday, October 17th, 2022 at 2:00 p.m. in Peaceful Hill Cemetery, Port Mouton, NS. No flowers by request, donations may be made to S.HA.I.D. Animal Shelter. Note anyone attending Murray’s service is asked to please wear a mask, and respect social distancing. Online condolences may be made to www.chandlersfuneral.com

Offer Condolence for the family of REVISED – Thorburne; Murray Clark