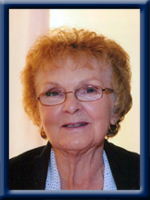 Born in Bear Point, Shelburne  County, she was a daughter of the late Ethren and Olive (Harlow) Wickens.

Louise taught school for 38 years and four months teaching in various schools such as Woods Harbour, Shag Harbour, Barrington Passage, Rosemere, PQ, Trenton, ON, Hammonds Plains, Brooklyn, Port Mouton and Milton. She was an avid fan of the Montreal Canadiens and the Atlanta Braves and loved to watch Coronation Street. She enjoyed quilting, reading, and doing crossword puzzles as well as family outings to the camp and to Bear Point. She was very family oriented and very devoted to the Salvation Army attending services every Sunday.

She is survived by her sons Jamie (Stacy) of Milton, and Mark (Kerri) of Dartmouth, her sisters Norma Goreham, of Woods Harbour, Edie Stoddard, of Bear Point, Luella (Ken) Welton, of Truro and her brothers Sandy (Peggy) Wickens, Bear Point, Allister (Judy) of New York as well as many nieces and nephews.

She was predeceased by her loving husband Vince; brothers Earl, Arth and Walter.

Visitation will be held on Saturday, April 20th, from 7-9 p.m., at Chandlers’ Funeral Home, Liverpool. A celebration of Louise’s life will be held on Sunday, April 21st, 2013, at 2:30 p.m. from the Salvation Army Citadel, Liverpool. Majors Kirk and Sharon MacLeod officiating. Burial will be in Milton Community Cemetery. Family flowers only, donations may be made to Salvation Army Liverpool Corps or the Canadian Cancer Society. Online condolences  may be made to www.chandlersfuneral.com

Offer Condolence for the family of Thorburne; Louise Elaine