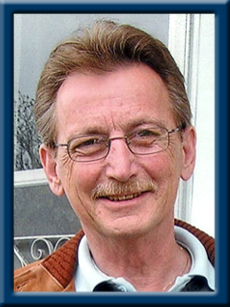 THISTLE – Patrick A., 71, of Liverpool, Queens County, passed away peacefully in Queens General Hospital, Liverpool on Friday, January 1, 2021.
Born in Liverpool, Pat was a son of Florence E. (Weagle) Thistle of Liverpool and the late H. Sinclair Thistle.
Pat worked as a parts manager for several Ford Automotive dealerships across Canada. In his early years, Pat was a delivery driver for Ben’s Bakery and worked for various grocery stores. He also coached minor hockey for a a number of years. In his leisure time, Pat enjoyed playing darts and bowling, fishing, karaoke, playing guitar and dancing. His dance card was always full! Later in his life, as his health declined, Pat enjoyed his ritual of morning coffee and the first cigarette of the day, playing VLT’s, Kingo Bingo and watching TV. His favorite shows were Wheel of Fortune, Pyramid, Jeopardy, Ellen and Coronation Street, which was not to be interrupted at any cost! His animal spirit would be the wolf as his apartment was covered in wolf pictures, ornaments and figurines.
Pat is survived by his son Darren; his sisters Sandy (Bruce) Knapton of Bedford, Tracy (Kevin) Samuels of Liverpool. His brothers Gary (Sue) of Liverpool and Tim (Barb) of Bedford and his special friend for many years, Bev Roy of Liverpool.
Cremation has taken place under the direction of Chandlers’ Funeral home, Liverpool. Funeral Service will be held Wednesday, January 6, 2021 at 11:00 a.m. from Chandlers’ Funeral Chapel, Liverpool, NS. Burial will be in Zion United Cemetery, Payzant Street, Liverpool. No flowers, donations may be made to Queens General Hospital Foundation or to a charity of your choice. Online condolences may be made to www.chandlersfuneral.com. All those attending Pat’s service are to bring a mask, hand sanitize, provide funeral staff with contact tracing information and practice social distancing wherever possible.

To see a recording of Pat’s service, please click here.

Offer Condolence for the family of Thistle; Patrick Albert