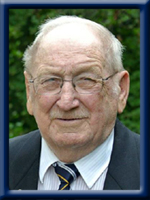 Born in Milton, Queens County, he was a son of the late Albert and Florence (Townsend) Thistle.

Clair served with the Royal Canadian Army Service Corps enlisting in 1953, serving in the Korean Conflict from 1955 to 1956 and was honorably discharged in 1976. He was a steward for Mersey Lodge, a chauffeur, worked on the silver culture crew and did fire patrols on the weekends for Bowater Mersey Paper Company Limited retiring in 1990. He will be fondly remembered for his “crazy” sense of humor, his love of the Blue Jays, even when they were losing, sitting out front getting “some sun” and will be missed by his extended family at Transcotia in Brooklyn.

Clair was predeceased by his sisters Rachel Balcom and Florence Anthony, his brothers Alec, Ronald, John, half brother Donny and his great grand daughter Chloe.

Cremation has taken place under the direction of  Chandlers’ Funeral Home, Liverpool. A private graveside memorial service will be held at a later date. No flowers by request. Donations may be made to Heart and Stroke Foundation of Nova Scotia. Online condolences may be made to www.chandlersfuneral.com

Offer Condolence for the family of Thistle; H. Sinclair