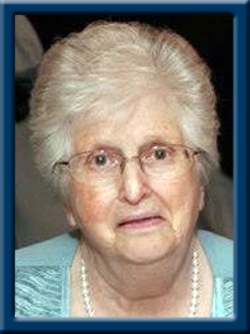 Elizabeth E. (Woodworth) Taylor, 83 of Rockland died on October 31, 2016 at the South Shore Hospital in Weymouth, Mass. She was born in Liverpool, Nova Scotia, Canada, daughter of the late Archibald and Gertrude (Freeman) Woodworth and was raised and educated there. She came to the United States on 1966 and settled in Rockland.
Mrs. Taylor had been a crossing guard for the Town of Rockland and later worked as a kitchen aide at the former Del Manor Nursing Home and for the final 10 years of her working career she served in the same capacity at the Memorial Park School.
Wife of the late Ernest Nauss and Edward Taylor, she is survived by her children, Joanne E. Hall of Rockland, Ma and Barry E. Nauss of North Carolina. She was the grandmother of Brianne Kerns, Jacqueline Sivell, Amanda Gregory and Kenneth Hall, great grandmother of Jacob Kerns, Aubrie Kerns Sophia Sivell, Ella Sivell, Layla Sivell, Eliza Gregory and yet to be born Fiona Gregory. Also surviving are her siblings, Willard Woodworth, Audrey Lawson, Beverly Enslow and Carolyn Jollimore, and many nieces and nephews.
The family welcomed friends and relatives to celebrate her life on Friday, November 4, 2016 at the Magoun-Biggins Funeral Home, 135 Union Street, Rockland, from 4:00-7:00 PM. A Prayer Service concluded the time of visitation.
Visitation for family and friends in Liverpool will be held Monday, November 7, 2016 from 12:00 until 2:00 p.m. with funeral service being held at 2:00 p.m. both in Chandlers’ Funeral Chapel, Liverpool. Burial will be in Zion United Cemetery, Payzant Street, Liverpool. Online condolences may be made to www.chandlersfuneral.com.

Offer Condolence for the family of Taylor; Elizabeth E.