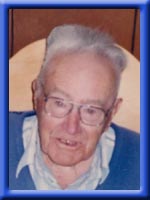 Born in Western Head, Queens County, he was the son of the late William Herbert and Annie Estella (Frelick) Tarr.

He was a veteran of World War II, serving in the Netherlands.

Lawrence was a fisherman for a number of years, both with his own vessel and then with other boat owners.  He was employed as a carpenter working for his brother Bill. Lawrence could tell stories about his younger years, remembering stories about his family and the other residents of area.   He could tell stories about the local rum running during Prohibition and funny stories about the first car in Western Head and how it scared the horses.   Lawrence liked being in the woods and knew the local area so well that the local surveyor would ask him about property lines.   He was an avid gardener who continued to plant and share a vegetable garden until he loss his vision.

Cremation has taken place under the direction of Chandlers’ Funeral Home, Liverpool. A graveside memorial service will be held at a later date with Reverend  Judy Cross officiating. No flowers by request. Donations may be made to North Queens Nursing Home or to Queens General Hospital Foundation. Online condolences may be made to www.chandlersfuneral.com

Offer Condolence for the family of Tarr, John Lawrence