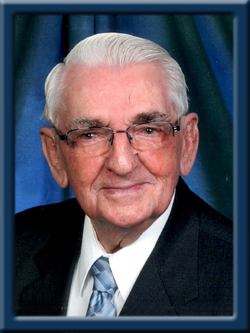 Swim – Murray “Clifton”, of Port Mouton, Queens County, passed away on Sunday, October 20, 2019 in Yarmouth Regional Hospital, at the age of 91.
Clifton was the youngest son of the late LeRoy and Lydia (Swim) Swim.
Affectionately known as “Bampie”, he was born in Clark’s Harbour and moved to Boston as a teenager. He worked as a short order cook and machinist before serving in the U.S. Air Forces. He was stationed in Africa during the Korean War and returned to Nova Scotia in the mid 1950s and worked as a fisherman for the remainder of his working career. Clifton married his sweetheart, Meta, in 1963. They loved country drives and dining out. He enjoyed making woodcrafts, deer hunting in his younger days, reading his Bible and mug-ups with family and friends. “Bampie” loved a good meal and a hot cup of tea. Clifton was a member of the Liverpool United Baptist Church and Zetland Lodge #09, A.F.&A.M., Liverpool.
He is survived by stepson Douglas (Rose) Huskins and stepdaughter Norma Swim, both of Port Mouton; grandchildren Alden (Laura) Huskins, Laura (Kyle) Huskins, Megan (Danny) Long, Sara (Rob) Wilkinson and Michael (Anne) Swim; great-grandchildren Rowan,Violet, Riley, Aynsley, Cassidy, Caleb, Samuel, Hannah, Levi and Vincent. Sisters Sybil Newell and Barbara (George) O’Rourke, both of Massachusetts as well as many nieces and nephews.
He was predeceased by his wife Meta (MacDonald) (Huskins); brothers Waldo and Wentzell; sisters Florence Crowell and Irma Newell.
Cremation has taken place under the direction of Chandlers’ Funeral Home, Liverpool. Visitation will be held in Chandlers’ Funeral Chapel on Friday, October 25, 2019 from 7:00 p.m. until 9:00 p.m. with a Masonic Service being held at 7:30 p.m. Funeral service will be Saturday, October 26, 2019 at 2;00 p.m. in Liverpool United Baptist Church with Reverend Dr. Steven Hopper officiating. Reception to follow. Burial to take place in Laurel Hill Cemetery, Port Mouton at a later time. In lieu of flowers, donations may be made to Liverpool United Baptist Church or a charity of your choice. Online condolences may be made to www.chandlersfuneral.com

Offer Condolence for the family of Swim; Murray Clifton