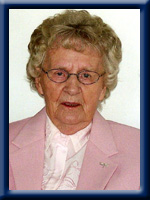 Born in Port l’Hebert, she was a daughter of the late John Edgar and Grace Dawson (Decker) MacDonald.

Affectionately known as “Nannie”, Meta was a generous, thoughtful, strong and feisty woman. She loved baking and cooking. She enjoyed daily drives and eating out for many years. She celebrated all special occasions surrounded by her family who she loved dearly.

Visitation will be Saturday, August 21st, 2010 from 7 until 9 p.m. in Chandlers’ Funeral Chapel, Liverpool. Funeral Service will be held Sunday, August 22nd, 2010 at 2:00 p.m. in Liverpool United Baptist Church. Reverend Steven Hopper officiating. Burial will be in Laurel Hill Cemetery, Riverhead Road, Port Mouton. Family flowers only, donations may be made to Heart and Stroke Foundation of Nova Scotia or a charity of choice. Online condolences may be made to www.chandlersfuneral.com

Offer Condolence for the family of Swim, Meta Jane