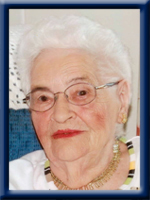 Born on September 1, 1919 in Central Port Mouton, she was a daughter of the late Clifford and Civilla (Leslie) Payzant and was a direct descendant of the Reverend John Payzant.

Frances married her husband John on December 26, 1938 in the old parsonage in Port Mouton and lived in Central Port Mouton for most of her life, except for a short time in Halifax after the war. She lived nearly ten years at Stonehaven Lodge in Port Mouton owned by her nephew Tim Rudderham. She shared a special bond with her sister Catherine who also resides there. She was a former member of Port Mouton United Church, sang in the choir and belonged to the U.C.W. She was an exceptional homemaker and an excellent cook. She enjoyed knitting for her family, watching soap operas, playing 45’s and visits from family and friends.

She was predeceased by her husband of 66 years, John, her sister Ruth Wagner and brothers Gordon and Cecil.

Cremation has taken place under the direction of Chandlers’ Funeral Home, Liverpool where visitation will be Thursday, July 31, 2014 from 2 p.m. until 4 p.m.. A private family graveside committal will take place in Peaceful Hill Cemetery, Central Port Mouton. Donations may be made to Peaceful Hill Cemetery Fund, First Responders Port Mouton, or charity of choice. Online condolences may be made to www.chandlersfuneral.com. The Swain family would like to thank all those who have cared for and visited our dear mother over the years.

Offer Condolence for the family of Swain; Frances Pauline